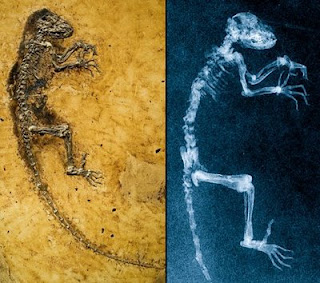 May 19, 2009—Meet "Ida," the small "missing link" found in Germany that's created a big media splash and will likely continue to make waves among those who study human origins.
In a new book, documentary, and promotional Web site, paleontologist Jorn Hurum, who led the team that analyzed the 47-million-year-old fossil seen above, suggests Ida is a critical missing-link species in primate evolution (interactive guide to human evolution from National Geographic magazine).
(Among the team members was University of Michigan paleontologist Philip Gingerich, a member of the Committee for Research and Exploration of the National Geographic Society, which owns National Geographic News.)
The fossil, he says, bridges the evolutionary split between higher primates such as monkeys, apes, and humans and their more distant relatives such as lemurs.
"This is the first link to all humans," Hurum, of the Natural History Museum in Oslo, Norway, said in a statement. Ida represents "the closest thing we can get to a direct ancestor."
Ida, properly known as Darwinius masillae, has a unique anatomy. The lemur-like skeleton features primate-like characteristics, including grasping hands, opposable thumbs, clawless digits with nails, and relatively short limbs.
"This specimen looks like a really early fossil monkey that belongs to the group that includes us," said Brian Richmond, a biological anthropologist at George Washington University in Washington, D.C., who was not involved in the study, published this week in the journal PLoS ONE.
But there's a big gap in the fossil record from this time period, Richmond noted. Researchers are unsure when and where the primate group that includes monkeys, apes, and humans split from the other group of primates that includes lemurs.
"[Ida] is one of the important branching points on the evolutionary tree," Richmond said, "but it's not the only branching point."
At least one aspect of Ida is unquestionably unique: her incredible preservation, unheard of in specimens from the Eocene era, when early primates underwent a period of rapid evolution. "From this time period there are very few fossils, and they tend to be an isolated tooth here or maybe a tailbone there," Richmond explained. "So you can't say a whole lot of what that [type of fossil] represents in terms of evolutionary history or biology."
In Ida's case, scientists were able to examine fossil evidence of fur and soft tissue and even picked through the remains of her last meal: fruits, seeds, and leaves.
What's more, the newly described "missing link" was found in Germany's Messel Pit. Ida's European origins are intriguing, Richmond said, because they could suggest—contrary to common assumptions—that the continent was an important area for primate evolution.
Fuente original: http://news.nationalgeographic.com/news/2009/05/090519-missing-link-found.html
Publicado por Dr. Víctor Castañeda