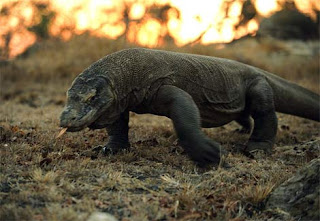 
Komodo dragons kill using a one-two punch of sharp teeth and a venomous bite, scientists have confirmed for the first time.
The find dispels the common belief that toxic bacteria in the Komodos' mouths are responsible for ultimately killing the dragons' prey

An animal that escapes a Komodo's initial attack soon weakens and dies. The fierce carnivore tracks the wounded creature and dines at its leisure once the prey collapses.
Researchers have long thought that the Komodo dragon, native to Indonesia, kills via blood poisoning caused by the multiple strains of bacteria in the dragon's saliva.
But "that whole bacteria stuff has been a scientific fairy tale," said Bryan Fry, a venom researcher at the University of Melbourne in Australia.
Fry and colleagues studied the biochemistry of Komodo venom after they had the rare opportunity to examine two dragons from zoos that both had to be put down due to terminal illnesses.
The team found that the dragon's venom rapidly decreases blood pressure, expedites blood loss, and sends a victim into shock, rendering it too weak to fight.
In the venom, some compounds that reduce blood pressure are as potent as those found in the word's most venomous snake, western Australia's inland Taipan.
Komodo Combo Attack
While his colleagues expressed surprise at the findings, Fry said he wasn't so shocked.
His earlier research had shown that other lizard species—such as iguanas, legless lizards, and monitor lizards—are also venomous.
In fact, Fry estimates that close to a hundred of the more than 5,000 known lizard species use venom.

What is surprising, Fry said, is Komodo dragons' elaborate venom-delivery system.
"It's the most complex duct system described in reptiles to date," he said.

Snakes typically have a single venom duct that leads to their fangs. But Komodos have multiple ducts located between their teeth.
However, this means Komodo dragons don't deliver their venom as efficiently as snakes, Fry said.
Rather than injecting venom directly via a forceful bite, the dragons use a specialized bite-and-pull motion to ooze the toxin into wounds during a sustained, frenzied attack.
The combination of venom and multiple lacerations from the lizards' sharp, serrated teeth is what makes the dragons so deadly.
"They're not like the cobra, where venom is the only game in town. Komodos have a combined arsenal," Fry said.
The findings suggest that the Komodo's ancient relative, the Megalania, used a similar venom-plus-wounding approach.
The giant lizard, which roamed Australia about 40,000 years ago, measured about 13 feet (4 meters) long.
Fry's work, published in this week's issue of the Proceedings of the National Academy of Sciences, could mean that the Megalania was the largest venomous animal to have ever lived.
Publicado por Dr. Víctor Castañeda