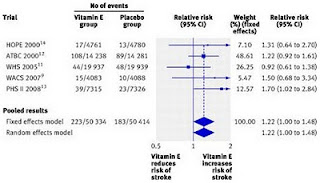 Review methods and data extraction
Two investigators independently assessed eligibility of identified trials. Disagreements were resolved by consensus. Two different investigators independently extracted data. Risk ratios (and 95% confidence intervals) were calculated for each trial based on the number of cases and non-cases randomised to vitamin E or placebo. Pooled effect estimates were then calculated.

Results
Nine trials investigating the effect of vitamin E on incident stroke were included, totalling 118 765 participants (59 357 randomised to vitamin E and 59 408 to placebo). Among those, seven trials reported data for total stroke and five trials each for haemorrhagic and ischaemic stroke. Vitamin E had no effect on the risk for total stroke (pooled relative risk 0.98 (95% confidence interval 0.91 to 1.05), P=0.53). In contrast, the risk for haemorrhagic stroke was increased (pooled relative risk 1.22 (1.00 to 1.48), P=0.045), while the risk of ischaemic stroke was reduced (pooled relative risk 0.90 (0.82 to 0.99), P=0.02). There was little evidence for heterogeneity among studies. Meta-regression did not identify blinding strategy, vitamin E dose, or morbidity status of participants as sources of heterogeneity. In terms of absolute risk, this translates into one additional haemorrhagic stroke for every 1250 individuals taking vitamin E, in contrast to one ischaemic stroke prevented per 476 individuals taking vitamin E.

Conclusion In this meta-analysis, vitamin E increased the risk for haemorrhagic stroke by 22% and reduced the risk of ischaemic stroke by 10%. This differential risk pattern is obscured when looking at total stroke. Given the relatively small risk reduction of ischaemic stroke and the generally more severe outcome of haemorrhagic stroke, indiscriminate widespread use of vitamin E should be cautioned against.