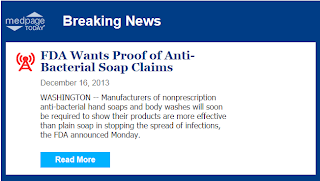 WASHINGTON -- Manufacturers of nonprescription anti-bacterial hand soaps and body washes will soon be required to show their products are safe for long-term daily use and are more effective than plain soap in stopping the spread of infections, the FDA announced Monday.Failing to meet such a standard would mean that antiseptic ingredients would have to be removed from over-the-counter products, or that anti-bacterial claims be removed from product labeling. The announcement came in a proposed rule released by the agency and doesn't apply to hand sanitizers and wipes -- which are alcohol-based and aren't used with water -- or to anti-bacterial products used in the healthcare setting.
The agency wants to amend a 1994 monograph that declared nearly all antiseptic active ingredients currently in use as "generally recognized as safe and effective." The FDA has been reviewing anti-bacterial active ingredients for the past several years, and hopes to finalize the rule around the fall of 2016.
Janet Woodcock, MD, director of the FDA's Center for Drug Evaluation and Research (CDER), said there are more than 2,200 anti-bacterial hand soaps and body washes currently available for consumers, but there is no scientific evidence showing these products are any more effective at preventing illness than washing hands with plain soap and water.
"Further, the risk of infection in everyday settings such as home, work, school, and public settings is relatively low," Woodcock said in a statement to CDER staff. "Moreover, some data suggest that long-term exposure to certain active ingredients used in anti-bacterial products could pose health risks such as bacterial resistance or hormonal effects."
Examples of those risks come from such ingredients as triclosan (liquid soaps) and triclocarban (bar soaps). Some animal studies that suggest that daily exposure to these products can effect estrogen, testosterone, and thyroid hormones, noted Sandra Kweder, MD, deputy director of the FDA's Office of New Drugs at CDER. Their effect on human safety has not been established.
"In order for anti-bacterial soaps and body washes to be considered generally recognized as effective, manufacturers would be required to conduct clinical trials demonstrating that their products are more effective than plain soap and water in preventing illness and the spread of certain infections when they're used by consumers," Kweder said in a call with reporters. The same would apply for their safety.
Nicole Bouvier, MD, professor of infectious diseases at the Icahn School of Medicine at Mount Sinai in New York City, said triclosan has been deemed an "endocrine disruptor."
"It is still unclear whether triclosan and similar biocides promote the development of antimicrobial resistance to antibiotics, but we do know that triclosan is a long-lived chemical," Bouvier said. "It has been found in soil, waste water treatment plants, lakes and streams, and even in many people's urine, where it has been associated with elevated body mass index and with environmental and food allergies."
The proposed rule will be published soon in the Federal Register with a 180-day public comment period that will close around June 2014. Kweder said manufacturers can submit data until December of next year. Kweder said FDA officials hope that's enough time for the appropriate studies to be completed and presented to the FDA for review.
"We actually don't know how much information companies already have available," she said. "We think that some companies may have some data that [they] have not previously been required to submit to us, and we do believe that some of these studies may already be in the works."
Until the FDA takes further action, consumers should make an "educated choice" about what products they use, Kweder said. "Washing with plain soap and running water is one of the most important steps consumers can take to avoid getting sick and to prevent spreading germs to others."
Alcohol-based hand sanitizers that contain at least 60% alcohol should be used if soap and water are not available, the FDA said.
Publicado por Dr. Víctor Castañeda