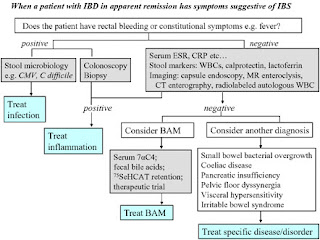 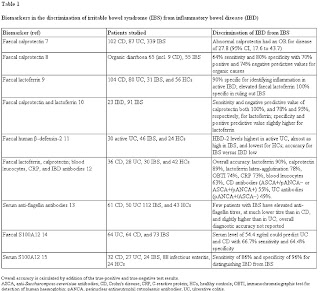 In many patients with inflammatory bowel disease (IBD), the symptoms of abdominal pain, bloating and diarrhoea are out of proportion with the demonstrated degree of inflammation; some symptomatic patients may have complete mucosal healing. Such patients often may undergo invasive, costly and potentially dangerous tests in search of residual inflammation. What are the diagnostic considerations in such patients? How should they be managed?

Symptoms of irritable bowel syndrome in patients with IBD in remission

Irritable bowel syndrome (IBS) is a commonly encountered disorder, with point prevalence of ~10%; symptom-based criteria facilitate its diagnosis. Although IBD affects ~0.4% of the population in the United States and Europe, IBD and IBS may concur in a patient, purely by chance. How often do patients with IBD and inflammation in remission manifest symptoms that suggest IBS, usually IBS with diarrhoea (IBS-D)?

From a database of over 1500 patients with IBD, Zaman et al identified 30 with ileal Crohn's disease and 25 with ulcerative colitis involving only the rectosigmoid, and stable symptoms, no changes in medications or use of chronic steroids for 3 months, and no prior bowel surgery. Rome II IBS criteria were met by 67% of patients with Crohn's disease and 60% of ulcerative colitis, with similar symptoms in the two diseases. Thus, symptoms of IBS are common in IBD patients whose inflammation appears to be stable or in remission.

In patients who do not suffer IBD, the symptoms of IBS are not sufficiently specific to differentiate, in the absence of objective tests, other conditions such as pelvic floor dyssynergia or coeliac disease that respectively mimic constipation-predominant IBS (IBS-C) and IBS-D. Similarly, in patients with IBD, the presence of diarrhoea, urgency and pain in the absence of significant inflammation typically occur without constitutional symptoms or rectal bleeding, and may result from specific diseases that require specific treatment rather than symptomatic treatment. The first steps are to exclude infection (eg, cytomegalovirus or Clostridium difficile infection), and to confirm that the inflammatory process is sufficiently controlled and unlikely to be the cause of symptoms.
Publicado por Dr. Víctor Castañeda