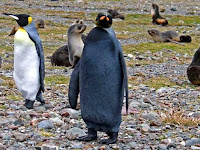 Lindo !!!
King Penguins are notorious for their prim, tuxedoed appearance -- but a recently discovered all-black penguin seems unafraid to defy convention. In what has been described as a "one in a zillion kind of mutation," biologists say that the animal has lost control of its pigmentation, an occurrence that is extremely rare. Other than the penguin's monochromatic outfit, the animal appears to be perfectly healthy -- and then some. "Look at the size of those legs," said one scientist, "It's an absolute monster."
The under-dressed penguin was photographed by Andrew Evans of National Geographic on the island of South Georgia near Antarctica. As the picture circulated, some biologists were taken aback -- including Dr. Allan Baker of the University of Toronto. His first response was disbelief:
Wow. That looks so bizarre I can't even believe it. Wow.
While multicolored birds will often show some variation, Dr. Baker explains that what makes this all-black King Penguin so rare is that the bird's melanin deposits have occurred where they are typically not present -- enough so that no light feathers even checker the bird's normally white chest.
Andrew Evans:
Melanism is merely the dark pigmentation of skin, fur -- or in this case, feathers. The unique trait derives from increased melanin in the body. Genes may play a role, but so might other factors. While melanism is common in many different animal species (e.g., Washington D.C. is famous for its melanistic squirrels), the trait is extremely rare in penguins. All-black penguins are so rare there is practically no research on the subject -- biologists guess that perhaps one in every quarter million of penguins shows evidence of at least partial melanism, whereas the penguin we saw appears to be almost entirely (if not entirely) melanistic.
Whether or not the all-black look catches on in the penguin fashion world, it's nice to see someone dressing-down for once.
Publicado por Dr. Víctor Castañeda